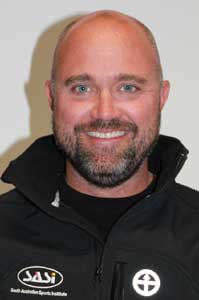 Nathan, a Canadian by birth, began coaching junior athletes in the 1990's while he was a National Team member with the Canadian Kayak Team. One of the first athletes he coached was Canada's Adam van Koeverden, a multiple World and Olympic champion who to this day continues to train alongside Australian athletes in the lead up to Rio.

Following his athletic career, Nathan was keen to give back to the paddling community in Canada and began full-time coaching in 2002 at the club level. During his 2 years at the Mississauga Canoe Club he went on to coach numerous Canadian Champion crews while also sending 3 athletes to the 2004 Olympics in Athens.

In 2005, Nathan saw an international coaching opportunity in the United States and was hired as the Head Coach of the US Canoe and Kayak Team. Working with a very young team, his athletes went on to win several World Cup medals and improved the international standing of the US team where sprint kayak is a relatively unknown sport. Despite some promising results in the lead up to the Beijing Olympics, the US team fell short of its medal target.

Despite the disappointment in Beijing, Nathan continued to work with the US program in 2009 but was given an opportunity to reunite with Adam van Koeverden in Canada in the lead up to the 2010 World Championships where Adam won a bronze in the K1 500m event.

During his tenure in the US, Nathan worked in various training environments alongside the Australian National Team so when the opportunity came to work alongside Jimmy Owens and the Australian Men's 1000m program, he quickly took up the offer knowing that Australia had a rich history of producing Olympic medal winning crews. Following a successful 2011 campaign where the Australian men's K4 went on to win a silver medal at the World Championships in Hungary, Nathan was employed as Head Coach of SASI's sprint canoe program and since then he has been a part of some amazing success both at the National and International levels.

Highlights include being a part of the coaching staff of the gold medal winning K4 crew in London and also seeing numerous SASI athletes being nominated to Australian National Teams competing at Senior, U23 and U18 World Championships in Europe and in Canada.

In August 2014, 2 SASI athletes (Sean Lohse and Jayden Ellis) were a part of Australia's bronze medal winning K4 crew at the U18 World Championships. This was a first ever medal for Australia in this event at the World Juniors.

Nathan believes in a holistic approach to coaching where the well-being of the athlete off the water is just as important as the physical process of preparing athletes for the highest level of competition. Creating a strong squad culture where individual improvements happen almost automatically through quality group training environments. Athletes in this type of environment push themselves to a higher physical level while still enjoying the journey from one major competition to the next. This is an exciting period for the SASI Canoe sprint squad where many athletes are striving for success in Rio and beyond.